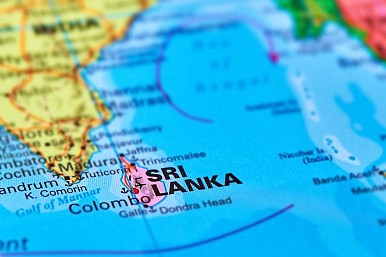 Can Sri Lanka Leverage Its Location as Indian Ocean Hub?

To take advantage of its strategic location, Sri Lanka needs to overhaul its transport, logistics, and trade sectors.

By Anushka Wijesinha for The Diplomat
June 20, 2016

Sri Lanka is in an enviable location. The busy East-West shipping route passes just six to ten nautical miles south of the island. More than 60,000 ships ply this route annually, carrying two-thirds of the world’s oil and half of all container shipments. Sri Lanka is also at the doorstep of a dynamic market – India. Already, 75 percent of Colombo port volumes are transshipments from India; the Indian middle class market alone is set to expand to 10 times the island’s entire population. In addition, Sri Lanka has a free trade agreement with Pakistan, which is going to be expanded to cover services and investment, and will likely have an agreement with China soon.

These developments together will make Sri Lanka unique in having preferential market access to India, Pakistan, and China — combined, these markets account for 2.7 billion people. When I meet investors and trade delegations from around the world, overwhelmingly, Sri Lanka’s geographic location and access to regional markets are cited as top reasons for their interest in the country’s economy. At the heart of converting this locational advantage to becoming a serious player in international commerce is logistics and transport.

Location is lost without openness

Sri Lanka’s openness to trade is important to leverage this opportunity. But over the last decade or so, the country has slipped back substantially on trade openness.

Trade (exports plus imports) now forms a smaller share of the Sri Lankan GDP than ever before. Back in 2005, trade accounted for close to 80 percent of GDP; by 2015 this had fallen to a paltry 55 percent. Compare that to some other leading regional economies that are doing well: Vietnam’s trade-to-GDP ratio is now around 170 percent, Malaysia’s is 150 percent, and Thailand’s is 120 percent. Of course Singapore is an outlier at 350 percent, but these figures all indicate the degree to which trade drives these growing economies. Sri Lanka is a small country with a small domestic market. Without external trade, it cannot achieve high growth. So this low and declining trade-to-GDP ratio needs to be reversed.

Some steps to remedy this are already underway. There are reports of a comprehensive review of Sri Lanka’s trade and tariff policies, in order to see how and where to liberalize, and there are efforts to improve trade facilitation and also to streamline investment approvals.

Given the country’s geostrategic location, international logistics linked to Sri Lankan ports and airports seems a “no-brainer.” The logistics and transport services sector is an important sub-sector of the economy. It accounts for 11 percent of GDP and 20 percent of the total services sector, although its share hasn’t changed much over the last five years. Year-on-year growth in logistics and transport services has been above overall GDP growth, and, between 2010 and 2015, the sector expanded by 40 percent. Over the last five years, the sector’s contribution to growth has averaged around 12 percent.

Within Sri Lanka’s services exports, transport services — that is shipping, aviation, and related activities — amount to 35 percent of total services exports. This is positive, showing that the country has begun to leverage its location advantage. Sri Lanka’s 35 percent share of transport services puts it ahead of Vietnam (around 20 percent), Thailand (10 percent), and Malaysia (12 percent).

Sri Lanka is expected to attract an increasing share of trans-Indian Ocean trade as well. According to estimates by KPMG, the Asia-Pacific freight industry is set to grow at around 12 percent each year, and the Port of Colombo already seeing around a 15 percent annual growth in transshipments. The South Asia Gateway Terminal (SAGT) is running profitably and pushing regional boundaries in efficiency and performance. The new Chinese-run Colombo International Container Terminals (CICT) is also making waves. When the CMA CGM Marco Polo — until a couple of years ago the world’s largest container ship, with a capacity of 16,020 twenty-foot-equivalent units (TEUs) — arrived in Colombo in September 2015, it showed Colombo’s emergence as a growing transshipment hub capable of handling the increasingly large number of mega-ships that are plying Asia-Europe trade. Fourteen services using mega-ships call at CICT weekly.

Moreover, many prominent global carriers come to Sri Lanka’s ports, but according to some indicators there is still some way to go in terms of connectivity. The Liner Shipping Connectivity Index, which measures how well countries are connected to global shipping networks, scores Sri Lanka at 53, above Vietnam at 47 and Thailand at 45, but well behind Malaysia at 104 and Singapore at 114. Part of this may be due to the restrictions on foreign ownership of shipping operations. To leverage the geographic advantage and bring in a global player like Maersk, for instance, the foreign ownership cap (currently at 49 percent) would need to be reduced.

Sri Lanka should also consider possibilities in aviation. It may not be immediately convincing that aviation services should be considered a key policy issue for developing countries like Sri Lanka – there are a lot of other things on the table demanding attention. The traditional wisdom that air transport is a luxury transportation mode is still common in much of Asia. However, this industry is essential for Sri Lanka to gain more from globalization and international trade. Globally, nearly 35 percent of international trade is carried by air. It is also noteworthy that close to 50 percent of air cargo is transported on passenger flights as opposed to designated cargo flights. And so, a growth in passenger flights has automatic spillover benefits for cargo transport.

Furthermore, we have ample evidence to show that liberalizing air services supports tourism and reduces the costs of trade, especially in high-value added supply chains such as parts and components, electronics, perishable food, or cut flowers. Especially if Sri Lanka wants to get into global production networks, air services connectivity will be important. To improve, the country should reconsider its restrictive Bilateral Air Services Agreements (BASAs). For instance, across South Asia, BASAs with regional neighbors are more restrictive than similar agreements with countries outside South Asia! Sri Lankan policymakers also have to look at the ownership and operation of airports, airlines, ground handling services, and maintenance, repair, and overhaul  (MRO) services. This area has received relatively little attention from economists and policy experts in Sri Lanka, but must become a priority, given the island’s advantageous location and interest in being part of global production networks.

According to the global risk consultancy Global Risk Insights, “Sri Lanka is set to become a destination of choice among businesses looking to tap opportunities in pan-Indian Ocean trade due to its strategic location.” The fact that, overwhelmingly, the investors I meet say that Sri Lanka’s location and access to big markets like India, Pakistan, and eventually China is a key attraction in their decision to invest here reiterates the case for focusing on the island’s trade, investment, and logistics policies. Leveraging the island’s location can be a game-changer for economic growth, and focusing on the transport and logistics sector is a sine qua non in shaping the country as an attractive regional hub.

Anushka Wijesinha is the Chief Economist of the Ceylon Chamber of Commerce. He is a graduate of University College London and the University of Leeds Business School. The views expressed here are strictly the author’s own.

November 17, 2017
What’s With the New China-Thailand Military Facility?
Despite the general hype, specifics about the project remain unclear.
Read Post
Parsing Trump’s Recent Policy Statements on the South China SeaNo, Fashion in India Has Not Become a ‘Nationalist Cause’Leaks Unveil Kazakh Officials with Offshore LinksThe Real Threat to Hinduism: The Slow Death of India's RiversWhy Has Australia Shifted Back to the Quad?
Latest Features

November 11, 2017
APEC 2017: Why Trump’s Presidency Is an 'Enormous Gift' to China
Trump once again pitches ‘America First’ at the APEC summit, while China's president calls for further cooperation.
Read Story

November 10, 2017
Zon, Zen, and the Art of Mass Mobilization in Indonesia
Islamists have gained strength thanks to political support from Prabowo Subianto's allies.
Read Story